Volcanoes of Auckland A Field Guide

A fully illustrated field guide for New Zealanders and visitors to take with them out among the 53 volcanoes that shape this city. Volcanoes of Auckland is a handy field guide to the fiery natural world that so deeply shapes New Zealand’s largest city–from Rangitoto to One Tree Hill, from Lake Pupuke to Orakei Basin. For hundreds of years, volcanoes have played a key part in the lives of indigenous Maori and Europeans–as sites for pa, kumara gardens, or twentieth-century military fortifications; as sources of stone and water; and now as parks and reserves for all to enjoy. This field guide features: an accessible introduction to the science of eruptions, including dating and the next eruption; a history of Maori and Pakeha uses of the volcanoes; an illustrated guide to each of Auckland’s 53 volcanoes, including where to go and what to do; and aerial photography, maps, and historic photographs–over 400 illustrations, 80% of them new. This field guide will help readers engage afresh with the history, geography, and geology of Auckland’s unique volcanic landscape. Volcanoes of Auckland is the essential guide for locals, tourists, school children, and scientists, as they climb up Mt Eden or North Head and take in the volcanic landscape that so shapes life in New Zealand’s largest city. 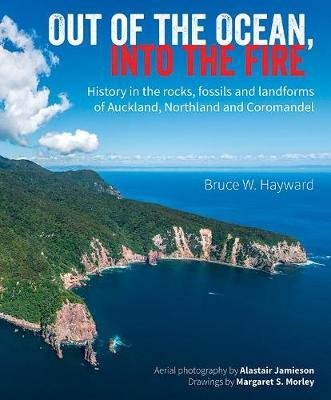 Out of the Ocean, Into the Fire History in the rocks, fossils and landforms of Auckland, Northland and Coromandel

For decades teachers, biologists, geographers and interested members of the public have asked for an up-to-date account of how Northland, Auckland and the Coromandel Peninsula and their landforms were formed. Here, for the first time, is an accessible account designed to be of interest to all levels of understanding. Almost all of the older rocks were deposited as sediment or erupted as lava on the floor of the ancient Pacific Ocean. Some were plastered onto the coastal edge of Gondwana, and at least 100,000 km3 of these rocks were pushed up out of the ocean and slid onto Northland, about 20 million years ago. About the same time, 1 km-thickness of Waitemata sandstones were deposited in a deep-sea basin over Auckland. Most of the subsequent history of northern New Zealand was dominated by fiery volcanic activity of greater diversity than any area of similar size elsewhere in the world. This included eruptions of andesite stratovolcanoes, giant caldera volcanoes, searing ignimbrite flows, viscous rhyolite domes and at least 200 small basalt volcanoes erupted in seven volcanic fields. The present-day shape and landforms of the region reflect its more recent history with local uplift, erosion, volcanic activity, construction of New ZealandÂ¿s largest sand-dune barriers and harbours, and moulding of the coast by the oscillating sea levels during the Ice Ages.