Often hailed as one of the best travel books ever written,Veniceis neither a guide nor a history book, but a beautifully written immersion in Venetian life and character, set against the background of the city’s past. Analysing the particular temperament of Venetians, as well as its waterways, its architecture, its bridges, its tourists, its curiosities, its smells, sounds, lights and colours, there is scarcely a corner of Venice that Jan Morris has not investigated and brought vividly to life.

Jan Morris first visited the city of Venice as young James Morris, during World War II. As she writes in the introduction, ‘it is Venice seen through a particular pair of eyes at a particular moment – young eyes at that, responsive above all to the stimuli of youth.’Veniceis an impassioned work on this magnificent but often maddening city.

‘The best book about Venice ever written’Sunday Times

‘No sensible visitor should visit the place without it . . .Venicestands alone as the essential introduction, and as a work of literature in its own right.’Observer 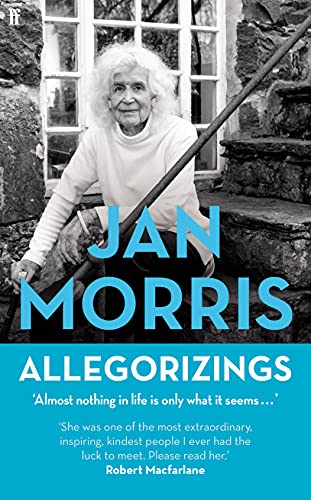 Not so long ago, feeling intimations of mortality, Jan Morris embarked on a wholly novel literary enterprise. What began as a series of high-minded letters to her late daughter–in the style of Lord Chesterfield addressing his son–quickly transformed itself into a potpourri of mini-essays and vibrant reminiscences, organized around experiences both majestic and mundane, from traveling the world with her lifelong partner, Elizabeth, to sneezing and kissing and simply growing old.

So Allegorizings came to be, and so Morris decided that it should only be published upon her death, not because she had anything to hide but, merely, in parting. Featuring essays largely written in the early twenty-first century, Allegorizings reflects, above all, Morris’s steadfast conviction that nothing is only what it seems. In fact, she observes, everything is allegory. Indeed, in Morris’s telling, even life–the whole conundrum of existence–is one long, majestically impenetrable allegory.

Taking us from the separatist hippie colony of Bolinas, California, to her home country of Wales, and introducing us to Nepalese Sherpas and elderly cruise-goers alike, Morris follows the throughline of allegory throughout her works. In one essay, she lambasts the joylessness of maturity (\”Maturity! Did ever a heart thrill to the sound of it, still less the meaning?\”) and in another, decries the nonsense of nationality. With characteristic verve, she offers odes to whistling and cursing, cats, and exclamation points. Morris’s travels anchor the collection, as she revisits the iconic settings of her previous works. We join her aboard the storied Orient Express, as well as tube trains passing through the purlieus of London. So too, we hike the foothills of the Himalayas–where Morris burst onto scene with her on-the-spot reportage of the first ascent of Everest–and reflect on the picaresque allure of Tournus, a dichotomized town in France where one France, bearing all the vestiges of privilege, seems to kiss another.

Intimate and luminously wise, Allegorizings is as much a testament to the virtues of embracing life as it is a testament to its charming, indignant, and ever-surprising author. In her final work, Morris’s writing is as erudite as ever, conveying a generosity of spirit \”flavored by well-earned crankiness\” (Vox). Though newly bereft of her company, readers will be reminded what \”a good, wise, and witty companion\” (Alexander McCall Smith) Morris has been to so many, for so long.