The Company Quartet The Anarchy, White Mughals, Return of a King and the Last Mughal

From multi-award-winning and bestselling historian William Dalrymple, a four-book collection chronicling the thrilling rise and fall of the East India Company.We still talk about the British conquering India, but that phrase disguises a much more sinister reality. For it was not the British government that began seizing chunks of India in the mid-eighteenth century, but a dangerously unregulated private company headquartered in one small office, five windows wide, in the city of London. Bringing together two decades of meticulous research and masterful narration, ‘The Company Quartet’ tells the remarkable story of how the magnificent Mughal empire, which then generated just under half the world’s wealth, disintegrated and came to be replaced by the first global corporate power: the East India Company. William Dalrymple’s epic, bestselling and multi-award-winning histories are now available in this magnificent paperback box set, presented in a stylish slipcase. Comprised of four individual books – The Anarchy, White Mughals, Return of a King and The Last Mughal – this essential collection spans over two hundred years of tumultuous colonial history, covert political machinations and bloody resistance.PRAISE FOR THE COMPANY QUARTET:‘Gorgeous, spellbinding and important’ Sunday Times ‘Rampaging, brilliant, passionate history’ Wall Street Journal‘Magnificent … Dalrymple has uncovered sources never used before’ Guardian‘Vivid … unmatched … revolutionary … humane’ Sunday Telegraph 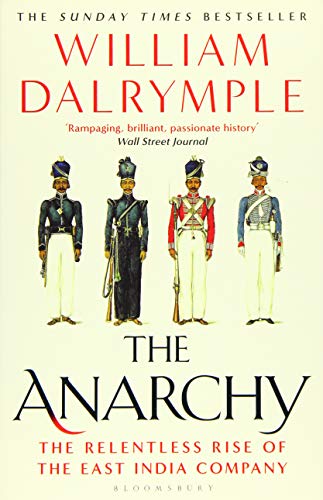 The Anarchy The Relentless Rise of the East India Company

THE TOP 5 SUNDAY TIMES BESTSELLER
ONE OF BARACK OBAMA’S BEST BOOKS OF 2019
THE TIMES HISTORY BOOK OF THE YEAR
FINALIST FOR THE CUNDILL HISTORY PRIZE 2020
LONGLISTED FOR THE BAILLIE GIFFORD PRIZE FOR NON-FICTION 2019
A FINANCIAL TIMES, OBSERVER, DAILY TELEGRAPH, WALL STREET JOURNAL AND TIMES BOOK OF THE YEAR

‘Dalrymple is a superb historian with a visceral understanding of India – A book of beauty‘ Gerard DeGroot, The Times
In August 1765 the East India Company defeated the young Mughal emperor and forced him to establish a new administration in his richest provinces. Run by English merchants who collected taxes using a ruthless private army, this new regime saw the East India Company transform itself from an international trading corporation into something much more unusual- an aggressive colonial power in the guise of a multinational business.

William Dalrymple tells the remarkable story of the East India Company as it has never been told before, unfolding a timely cautionary tale of the first global corporate power.